NO ONE BELONGS HERE. (OR: FEMINISM IS NOT AN ISLAND OF FELICITY) 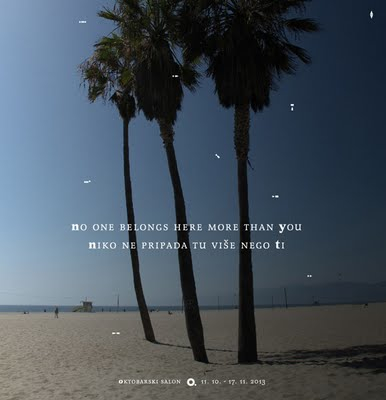 Catalogue Essay by Sonja Lau, in the context of the Curatorial School (54th October Salon) organised by Jelena Vesic

“One can hardly imagine a more boring novel, and it is sad to see children still read it today.”

In as letter to Goran Ðorđević, mailed from New York at the end of the 1970s, Carl Andre points at a curious paradox, which will provide the basis for his refusal to join Ðorđević‚s call for an International Strike of Artists.1 Quoting president Richard Nixon, who allegedly warned his daughter to visit art galleries and museums as those were frequented by “Jews and homosexuals”, Andre shows little belief, at least what concerns the American environment of his time, that such a proposed action could reach out to the authorities in power or have a benefit for the artistic scene. As a matter of fact, the artist, by going back to Nixon’s conspicuously deluded argument, claims to finds no trace of a problematic antagonism between the arts and its outer sphere at all that would urge to be addressed. On the contrary, he tackles the problem in the radical indifference towards and overt dismissal of the arts, concluding that the suggested art strike would risk to impair nothing but the scene itself. In doing so, he invokes, somewhat accidentally, a notion of the arts as a naturally isolated, sealed off place: an island-state of the arts.

Certainly, to Andre, as to many artists of his generation, this art-island, albeit presented with a certain victimization, is not merely a dystopic place. On the contrary, it is through this image, back then, and by keeping its mode of separation intact, that both a critique of the American ruling order and his ultimate artistic interest—the autonomy of arts—can be expressed.

Although Andre’s brief note to Ðorđević might only disclose a small partition of his actual positioning towards the International Strike of Artists (the artist had been previously involved in the New York Art Strike) and despite the letter’s palpable caricatural overtone, the notion of the arts as a separated space—an “island”—both in its dystopic and utopic rendering—seems to have lost little of its problematic up to today. Already Alfred H. Barr, founder of the Museum of Modern Art as well as occasionally authored and hold responsible for early experimentations with the format of the White Cube, gives proof of this supposed analogy in terms of their shared codex of separation. To him, the deliberately produced lack of societal factors and the exclusion of any contextual indicators by means of museal whiteness and void, pioneered a sense of ‚freedom‘—a differently different art that would be developed and perceived without any possible recursion to already established belief systems. Barr’s museum is the expression of a utopia, an island-state in its ideal constitution: potent of the ability to create content without context. “Dreaming of islands” writes Gilles Deleuze “is dreaming of pulling away, of being already separate, (…) or, it is dreaming of starting from scratch, recreating, beginning anew.”2 Borrowing from both of those movements, Barr seems to call for an artistic production that is deeply indebted to the ‚dream of the deserted island‘, a project that as it reaches out to such mythological utopos, is bound to fail. It comes to no surprise that a few decades later, artist and critic Brian O’Doherty sets out to rephrase Barr’s curatorial utopia as a rigid, and somewhat mechanical ideology: “The outside world must not come in, so windows are usually sealed off.”3 Tangibly letting the dream of seclusion slip into a fiasco of mere exclusion; transfiguring the dream of new beginnings into a canonical machinery, his critique proves a striking relevance up to today, even well beyond the White Cube. It thus seems that the historical and conflicting relationship between the “island-dream”—the quasi-mythological strive for a new beginning—and the arts, as conjured by this essay, allows for a second glimpse at contemporary modes of production and their specific entanglement, or, appropriation of those not quite utopic grounds, that once urged to “swim in the white free abyss.”4

The fact that this year’s October Salon features nothing less than the depiction of three lonely palm trees adorning an idyllic beach scene—an image that, albeit not directly representing the “dream of the island”, palpably calls up a consistent longing for it—does in this context not only puzzle due to its immediate effect of de-locating the exhibition from itsurban surrounding. Camouflaging the entire facade of the too familiar venue—a former department store in the center of Belgrade—the depicted scene imposes a form of subtraction onto the prominent architecture. By means of what resembles a strategy of counter-specificity, (…..)

1See The Strike of Art Production by Jelena Vesić, published in the catalogue SKC and the Political Practices of Art by Prelomkolektiv